The remarkable history of a prize binding

As part of our book conservation programme at West Dean College, we conducted a preservation survey in the Old Library of West Dean. Besides assessing the condition of the books, we were given the opportunity to select a book for further research. With this in mind, I was drawn to a small book called Pictura loquens; sive heroicarum tabularum Hadriani Schoonebeeck, Enaratio et explicatio. [in English: Speaking pictures; or on heroic images, an exposition and explanation by Adriaan Schoonebeeck], by Ludolph Smids and published in Amsterdam in 1695. I was intrigued by the appearance of the volume, rather than by the author or the contents. The binding, so it turned out, entails remarkable details that lead us from a small local Latin school in Gouda, to Tsar Peter the Great, as well as to the well-known art and book collection of the Beckford family.

The book is bound in a typical parchment lace case binding, called ‘spitselband’, with gold tooling on the boards and on the spine. The binder, so it seems, was not very experienced in tooling on parchment for the tool has been applied too hot or too long, as the black burns on the spine testify. Lace case bindings were popular bindings from the sixteenth to the nineteenth century all across Europe, yet the spitselband version is characteristic of the Low Countries. Amsterdam was an epicentre of book printing and publishing in seventeenth century Europe and books were printed in a great variety of languages, including Greek, Latin, Hebrew, Syriac, Arabic, and the common modern European languages. After printing, most textblocks were sold unbound and shipped to be distributed. The present book was printed in Amsterdam in 1695, as the title page informs us, and it received its binding in Gouda. The latter is known by the centrepieces on the boards that depict the coat of arms of this city, thereby indicating that the city paid for the binding. The endbands and the remains of the silk closing ribbons further represent Gouda with their red and white colours.

Typically, prize books cover topics related to classic antiquity or humanism, which is also the case for the present book. The author, Ludolph Smids (1649-1720) was a medical doctor, a specialist in classical antiquity and a poet. Smids lived in Leiden and Groningen and authored several books and poems in the course of his life. The present book consists of a collection of 60 quotations from ancient and modern Latin writers, each quote is supported with an interpretation of the editor and faced by a plate. The plates were reused in a publication twenty years later in Histoire mythologique des dieux et des béros de l’antiquité, published by Pieter de Coup in Amsterdam in 1715 — and we know that Pieter de Coup published more works by Smids.

Most prize bindings have a description of the prize order (ex praemio) on one of the first endleaves of the book. The order states the name of the student who received the prize, the name of the prize-giver and the accomplishments the prize was awarded for. Unfortunately, in the West Dean binding the ex praemio apparently has been torn out.

The publisher and the Tsar

The book has been published by Adriaan Schoonebeeck (1661-1705), an etcher-engraver who was a pupil of the famous etcher-engraver and map maker Romeyn de Hooghe (1645-1708) in Amsterdam (1676-9). About ten years after he set up his publishing company in Amsterdam in 1688, Schoonebeeck came in contact with the Russian Tsar Peter the Great (1672-1725), who was staying in Holland for several months as part of his first travels through Northern-Europe during the years 1697-1698. Nicolaes Witsen (1641-1717), then mayor of Amsterdam and the person to whom the present work is dedicated, introduced the Tsar to the illustrious botanist and anatomist Frederik Ruysch (1638-1731).

The inquisitive Tsar had been learning a wide range of crafts and trades during his incognito stay in Holland, including ship-making, watch-making, coffin-making, drawing, perform sections, and paper-making. Ruysch, however, taught him the very remarkable skill of pulling (bad) teeth from his subject’s mouth. The publisher of our book got in contact with the Tsar, just as well, and taught him the art of etching. One of the etchings made by the Tsar in 1698 is part of the collection of Amsterdam City Archives. At the time the Tsar returned home again, Schoonebeeck sold his shop and moved with the Tsar to Moscow. There, he opened an etching workshop for the crown and traded art on behalf of the Tsar. His workshop continued under his nephew Pieter Pickaert, who transferred it to St Petersburg in 1714 where it lasted until 1737. The papers of Picaart and Schoonebeek were bought by the Crown and are now in the Hermitage Collection.

What do we know about the binder and the date of binding of this Gouda Prize binding? Abraham Staal was active as bookbinder and bookseller in Gouda between 1709-1744 and made multiple prize bindings for the school in similar fashion as the copy in the West Dean Library. Is it possible that Staal is the binder of the present book? The historian Paul Abels, local historian at Gouda, has made an analysis of the minutes of one of the Latin School Board’s meetings and discovered that the school had decided to order ‘a new stamp or plate to decorate the books that are given as prizes to pupils’. The decision dates July 22nd, 1727. The prize binding in Paul Abels’s collection has the ex praemio dated December 1728¹. If we compare the coat of arms of that copy to the one at West Dean, it becomes clear that the two are quite similar. On account of this observation we may conclude that the West Dean binding is likely to be bound after 1727.

Next, we made the observation that the two coats of arms are quite similar, indeed – yet, the devil is in the detail, again, since the centrepieces are not entirely the same. If we have a close look at the West Dean binding, the words “(…) AD ASTRA” can be read, whereas these words are not present on Paul Abels’s binding. Gouda's motto Per aspera ad astra (Through hardships to the stars) was added to a later copy of the centrepiece tool, as the historian Jan Spoelder informs us (Spoelder, 571). Spoelder traced three bindings with the motto in the centrepiece, that were bound in 1766, 1771, and 1815. The version without the motto in the centrepiece is found by Spoelder on books bound in 1730, 1741 and after 1777, to which we can now add the copy of Abels bound in 1728. Next, on account of the stamps that were used and the dates of binding, I intend to conclude that at least two tools were used to decorate the books. The earliest binding with the motto that has been traced to the present dates from 1766. If we go along with this date post quam, this is to say that Abraham Staal cannot count as the binder of the West Dean copy, we have to continue our search for Gouda binders who continued the prize bindings since 1744. The fact that the tooling was not done very skilfully, would further support the theory that book was bound by the successor of Staal. True, we have not yet ruled out the possibility that the West Dean copy was bound sometime during the years 1727/8 and 1766, but we need further evidence to support this possibility, that is to say, we need the evidence of bindings stamped with the second tool and including the date of binding between 1727/8 and 1766. 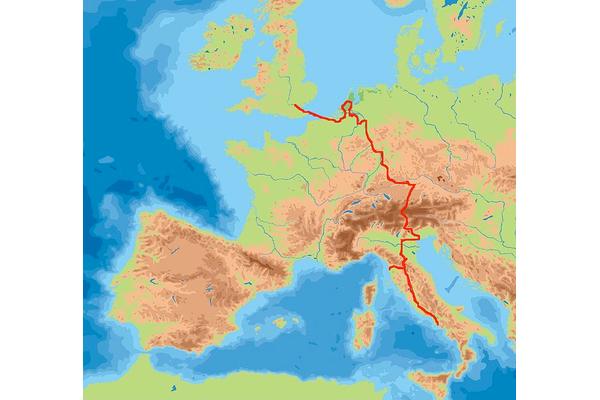 After the book was awarded to the respective student at Gouda’s school, it showed up at West Dean’s Old Library. How did it get there, and is it possible to trace its provenance? The prize binding arrived at West Dean through the James’ family. The book was purchased at the book auction of the Beckford art collection at Hamilton Palace, by Frank James in 1820. Frank is best known as an explorer and game hunter. Following upon the untimely death of Frank, caused by a tragic accident with an elephant in Africa, the book was inherited by William James, the father of Edward — the founder of West Dean College. This is to say that the book was part of the illustrious art collection of the Beckford family, once the most wealthy non-noble family in England. Most of their wealth was owed to their slave-plantations in the Colony of Jamaica. It is unknown, however, how the book ended up in William Beckford’s hands. It is possible that William Beckford bought the book on his grand tour through continental Europe to Rome, in 1780. Yet, even though the details of the travelings of the book in the eighteenth century remain a subject of speculation, the book bears witness to the Gouda Latin School and the Beckford collection now that it is part of the special collections of West Dean College Library.

¹Nota bene: Paul Abels was able to obtain his copy at an auction of books from the castle of Dampierre,
near Dampierre-en-Yvelines in the Chevreuse valley in France. According to Paul, the castle maintained a
well-known private library, with a special collection of prize bindings. There is no indication that this biding belonged to that same collection once, for it lacks the bookplate of the castle that Paul’s book has.

The Masters in Conservation Studies is the global industry standard for conservation; focusing on research through practice. Students draw on theoretical, scientific, and analytical study of artefacts and materials, and analyse the context and practice of conservation.

Find out more about the MA Conservation Studies programme.