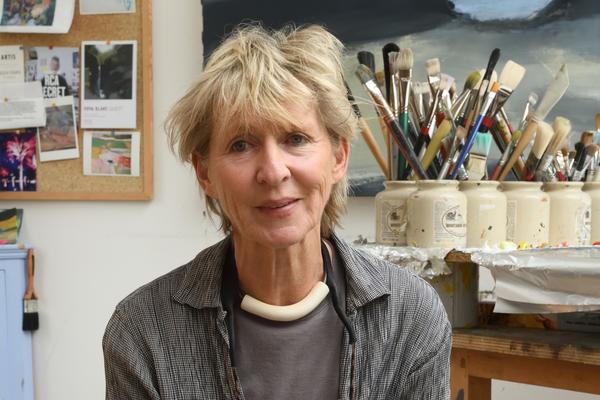 Talk us through your career path since graduating

Immediately after graduating in 2005, along with fellow student Tim Kent, a residency was created in a large barn outside Petworth (now the Moncrieff-Bray gallery). We worked non-stop for seven weeks with a show at the end which helped propel my career into regular exhibiting in Sussex, London and New Zealand.  I’ve had three solo shows at West Dean College of Arts and Conservation and two solo shows in Auckland, New Zealand. In 2015 two works were shown in the RA Summer Exhibition. I’ve also been an artist in residence on a research vessel between Newfoundland and Iceland (2006) and in 2015 and 2016 was artist-in-residence at Chichester Festival Theatre. My work has been included in group shows in Brighton, Southampton, Portsmouth, London, Paris and Auckland. I am represented by the Candida Stevens Gallery in Chichester and have an association with the Trish Clark Gallery in Auckland.

What projects are you currently working on?

I will have a solo show entitled ‘Passage’ in May 2020 at Candida Stevens Gallery, Chichester followed by showing the same work at the Bermondsey Project Space, London.  The work is a series of Road paintings - an idea that came to me during my time at West Dean. A time of not wanting to paint green landscapes, being surrounded by them but taking inspiration from my road trip to and from the college - particularly at night. Journeying has become a constant theme in my work.

What do you consider your biggest achievement to date?

Probably having three large scale paintings shown at Pallant House in the Garden Gallery in 2016 after a residency at Chichester Festival Theatre working on the production ‘Someone Who’ll Watch Over Me’.  Also showing work in a group show “et la peinture?” at the Galerie du jour, Paris (owned by Agnes B) in 2014.

Do you have any tips for recent graduates?

Always be curious about the world and keep reading about and investigating other artists. If opportunities for exhibiting look sparse then get together with like-minded artists to find your own exhibiting spaces such as pop-ups. Seek out people to collaborate on an idea with. Out of college it’s hard work keeping self-disciplined, especially if you are working on other jobs to keep afloat but it’s important to maintain a creative routine.

How do you think studying at West Dean College prepared you for what you do now?

Studying at West Dean gave me the luxury of time to investigate deeper into what I do and to be able to focus on that one thing. That has allowed me now to remember to keep focused on the elements that matter most to me in my work.

What's your favourite memory from your time at the College?

My most visual memory has to be the view of the surrounding landscape at night and the glow of light behind the hills. Also being surrounded by creative people in a creative environment and engaging in conversation over drinks in the bar.

Find out more about the Master of Fine Art course