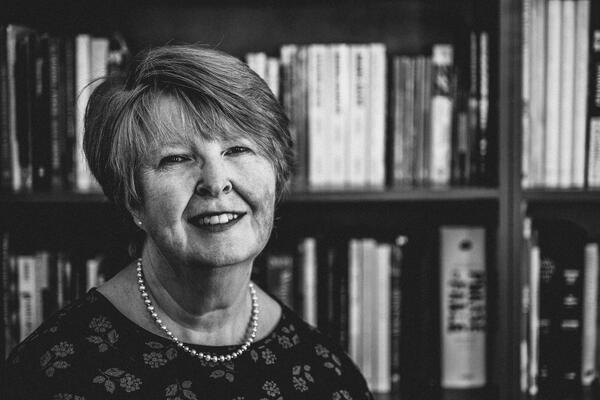 What do you consider your biggest achievement to date?
My biggest achievement so far has been signing a two book deal with a publisher. My first novel, This Place of Happiness will be published this winter. The first chapter in my novel is the same first chapter that was published in the Anthology from the Creative Writing and Publishing Course: Untold Stories One. It is lovely that it will be part of my novel and that the two are linked.

Talk us through your career path since graduating.
I finished my MA in Creative Writing and Publishing in 2017, and over the next year I finished my first novel, This Place of Happiness. I polished and prepared it, and sent it to a couple of publishers while continuing to work as a midwife.

In 2019 I had to stop working because of a brain injury and it slowed me down. I had a year where I couldn’t write creatively, but journaled instead. Since then I have re-examined what a writing life looks like for me. During the MA I had spent a lot of time exploring process and how to manage my time. I knew that I wrote best at night and would edit and revise in the morning. I still find that my ‘inner critic’ is happiest at the desk in my study in the morning, but the creative person curls up on the sofa with her laptop after dark. I still need to plan my time very carefully, and sacrifice other things; but once again I am finding enormous enjoyment in writing and have written two further novels since then. Two years on, my writing feels like me again, like coming home.

During the pandemic I set up and facilitated some online support groups. Mick Jackson, one of the Creative Writing tutors at West Dean, emailed me recently and commented that ‘ You need to be lucky, but the harder you work the luckier you get.’  This is when I was lucky; one of the support groups had another writer called Tony Millington. We encouraged him to find a publisher, and then he suggested I send my novel to the same publishers. Within a month I also had a publishing deal.

What projects are you currently working on?
My first novel is This Place of Happiness. It is the story of three women and their family. Rabia lives in her grandmother’s rotting Ottoman palace overlooking Algiers. She can’t escape. Rabia’s grandmother, Mani Aicha, can’t understand why Rabia won’t marry her friend Ali. Rabia knows that Ali only wants to marry so that they can escape to England allowing him the freedom to love another man.

Novel 2, All the Way Home, is being edited at the moment. It will hopefully be published next summer. It’s about three people living on the streets in Canterbury. Bea, a famous flautist, doesn’t know how to go back. Rachel, a pregnant drug addict doesn’t know how to move forward. Mick, a bankrupt farmer, just wants to forget. And then there’s Caleb, who wants to help them find their answers.

The third novel is gestating in a drawer. Jewel is more of a modern fairy tale. A little princess is lost. An independent woman is found. Are they the same person? It is at first draft stage.

I have also started planning and researching my fourth novel. I am finding that writing and editing and revision are such very different things that, for me, it is good to have more than one project. Diaspora is about two women. One is a migrant, and the other is a woman with dementia. It is about being outside of what is familiar to us. Being outside of the country or place where we are home.

Do you have any tips for recent graduates?
If your course lasts two years treat it as a three year course. Use your 3rd year, with the momentum generated and the contacts you’ve made, to develop the work you’ve done. Keep in touch with fellow students. Encourage each other. Use each other as a well of creative encouragement. They know you and they know where you’re coming from. You might never have friends like them again. My fellow graduates and I have a Whatsapp group. The three of us share what we are doing. Mark Peter Howe has published a book of poetry called ‘Unholy Verses, Sacred Songs: Poems About Lovers and Friends, The Earth, The Self, Cake and Death’ and Louise Bradford has a successful blog and has published a book called There is No Planet B. Both are well worth reading.

Have goals. Break them down into achievable chunks. Stick to them.
Manage your time.
Find out about yourself as a creative person and the patterns that affect your creativity; then optimise your time and make those patterns work for you..
And finally, work really really really really hard.

When I was at West Dean we were asked the question, ‘What do we want our body of work to look like when we die?’ I found this list in my notes. 'The complete works would contain 2 decent novels, a collection of poetry and 8 romances. There would be the campaign material, blogs and articles for my husband (when he was President of the Society and College of Radiographers), and some articles about Therapeutic Writing.' I’m working on it.

How do you think studying at West Dean College prepared you for what you do now?
I was a full time midwife when I studied at West Dean so I learnt how to manage my time. I didn’t do other things that I enjoy, like painting, or playing the piano. I spent effort to carve out writing time, and later editing and revision time, and I discovered what works for me. Having those skills meant that in spite of being unwell I knew how to build a new way of working that fitted around my limits. Transposing that to being a full time writer means that I know how to pace myself and set myself goals. I also know how important it is to stick to those goals.

As a midwife we had annual appraisals. As a writer I also use an appraisal system. My husband takes me to a restaurant for an ‘appraisal’ every four to six months. We take it in turns to discuss our careers and our goals. We talk about what we are finding difficult, and then plan ways to overcome the difficulties so that we can be more effective in what we are trying to achieve. Then we share a plate of profiteroles. It’s a good system.

What’s my favourite memory from West Dean?
Studying at West Dean was life changing and this is a difficult question. One of my most special memories was when I spent an evening with another student who was working on a project called Social Spinning. She taught me how to hand spin wool, and we talked about story telling and ‘spinning yarns’. At the end she gave me a small piece of the wool I spun. She had dyed it using indigo. I still have it in the handmade envelope she made for it. In This Place of Happiness the ink that stained my fingers that evening turns up again on the indigo veil worn by one of my favourite characters, a Tuareg called Abdulkader.

Did you receive any form of funding to study at West Dean?
I self funded.