Learn how to bind several single section books, with a range of stitching patterns to create a set of small books which can be used as sketchbooks or journals, or the starting point for artist's books.

In this one day course you will learn how to bind several single section books. These are also called pamphlet books, and are made from several folded sheets of paper collected together to form a section. The range of stitching patterns explored in this course creates an interesting set of small books which can be used as sketchbooks or journals, or the starting point for artist's books.

The aim of the course is to introduce several stitching patterns, first developed by the book artist Keith Smith, which create decorative and effective bindings for single section books. You will learn general bindery skills such as paper folding and cutting, use of the paper folder, awl, needle and thread. The course is taught through demonstrations and practice, and there are worksheets for you to take home to reinforce what you have learnt.

Timetable for one day courses

Students should arrive by 9am for registration.

What students need to bring

Please contact the College when booking if you have any specific requirements regarding materials or working (e.g. vegan) 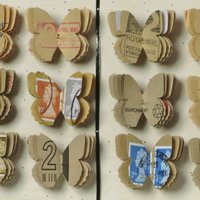 Tracey Bush trained as an illustrator, and successfully freelanced for many years before attaining her MA in Fine Art Printmaking from Camberwell College of Arts and Crafts. She has produced a series of books under the imprint Fathom Five Books, which have been acquired by national and international collections including the Yale Centre for British Art, Tate Britain and the Marvin Sackner Collection of Concrete Poetry. Tracey has a PGCE from the Institute of Education, London and regularly devises and delivers workshops in major institutions. In 2014 Tracey was commissioned to create the large scale 'Ports of the World' butterfly box, which is installed on the P&O cruise ship, Britannia.