Conservation of a Thonet 'No.28' chair

David Edwards, a Graduate Diploma Conservation Studies student specialising in Furniture, is a career changer. Prior to joining West Dean College of Arts and Conservation in September 2019, David worked as a management consultant in London.

As part of his studies, David has been working on the conservation of the Thonet ‘No.28’ chair, owned by the Edward James Foundation.

Its back but more so the shape of its seat have given this chair its name: “Herzform” (“heart shape”). Number 28 is perhaps known less than the popular Number 14, nevertheless daintier and smaller in size and of attractive proportions.

It is a steam bent beech framed chair with cane seat by The Thonet Brothers, manufactured between 1885-1900.

Thonet was the first company to start mass producing furniture – these chairs were the original ‘flat pack’. Their designs have stood the test of time, with chairs still being used in cafes, businesses and homes across the world today.

David’s chair arrived in a rather poor condition. The proper left and proper right leg to seat rail joints were completely loose, the joins of the back rest and seat frame had split and the bolt securing the seat rail to the proper right back leg was partially loose and undone.

There were deep scratches, gouges and dents to a number of areas on all sides of the underside of the seat rail and more deep scratches and gouges to the front and rear proper left legs. There was also evidence of rodent attack due to the chair most likely being left in an outbuilding for some time.

The cane seat showed significant damage with a large hole to the proper left side and a smaller hole in the front centre of the seat.

With a treatment goal in mind and the chair thoroughly examined, a treatment strategy could be developed and key stages put in place.

The chair was dis-assembled and the screws and bolts gently cleaned of rust and generally prepared for re-use.

To cover loss and breakages, reclaimed cane was woven into the broken cane seat and coloured to match.

The paper manufacturer’s labels inside the wooden frame needed re-adhering and cleaning.

To protect the label, a thin Melanex™ film was placed over the top of the labels and adhered to the inside of the frame on three edges.

This was carried out by Holly Drinkwater, a MA student in the Conservation of Books and Library Materials.

To infill the severely damaged surface of the wooden frame, various tested fillers and resins were used in the process.

The split bentwood joints in the seat back and stretcher were re-glued with animal glue, which was also used to secure the loose leg joints in place.

Four new beech plugs were made and glued into the screw holes for the screws re - attaching the seat back support to the seat rail.  The plugs were pared flush with the surface and colour matched to the existing surface.

The chair was re-assembled using the extant screws and bolts, and to finish, the entire beech frame surface was lightly waxed with pigmented wax (Georgian mahogany) and polished.

Due to the patching (rather than replacement) of the cane seat, the chair can only function with a firm squab made from hardboard; hard and soft foam wrapped in calico and a suitable top cover tied to the chair. 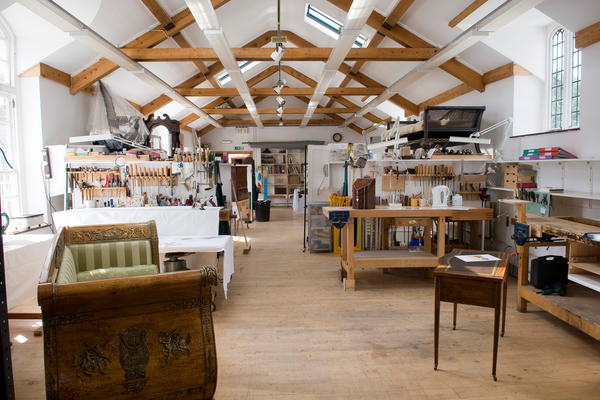 Find out more about the Graduate Diploma Conservation Studies at West Dean College of Arts and Conservation here.