The Etching Press: A generous gift

At the beginning of the year, through the support of Mary Dalton (printmaker and West Dean Short Course Tutor), it came to our attention in the Fine Art department that there was a possibility of a floor-standing etching press being donated to us. Without knowing any further details, we expressed our interest in adding to the existing printmaking facilities in the studios before unexpectedly finding out that the generous donor was none other than our former printmaking tutor and friend Marcus Rees Roberts. We were extremely pleased to make this connection and for the opportunity to breathe life into a press so closely associated with a member of staff.

Details about the press started to emerge, along with a related photograph of a similar model that gave us some idea of its size (and weight), with the added note that the press was currently dismantled and in storage beneath a staircase in North London. The press bed was said to be 13” x 30”, with the added draw of a huge and impressive ‘star wheel’ mechanism – quite distinct from our existing, much larger etching press made by Charles Brand of East 10th Street in New York. The various components of the smaller press were still undoubtedly extremely heavy, requiring specialist assembly and removal.

A first aborted attempt by West Dean’s technical team to pick up the press resulted in a van breakdown before reaching London (a whole other saga), but it was soon collected and brought back to the Fine Art studios. As the images of the press parts show, as it was laid out in the studios, it was no doubt a sturdy piece of equipment, fully complete, yet in need of reconditioning. The majority of metal surfaces were covered in dirt and rust, and the weighty rollers slightly pitted. A number of hours were spent cleaning the parts, soaking them in vinegar where possible, before using various grades of steel wool to remove discoloration and rust. Both the frame and the rollers recovered well under the treatment, and the press started to look a bit more recognisable.

It was decided to freshen up the moulded frame of the press with black metal paint, emphasising our intention for the Fine Art students to use the press as soon as possible, trying to protect it from any further deterioration and damage that might come about through everyday use. Technical Demonstrator, Neil Finch, himself trained as a cabinet maker, took the five wooden spurs of the ‘star wheel’ into the Main Workshop in order to strip, sand and re-treat them whilst the central hub and ring mechanism were being painted. In addition, a wooden platform was devised and built such that the press could be moved with a pallet truck when the studios needed to be converted into exhibition spaces at the end of the academic year.

Gradually, more and more work on the press took place over a period of weeks, before all the pieces were clean, prepped and ready for reassembly. Three people carefully co-ordinated the simultaneous manoeuvring of extremely heavy and awkward pieces of metal: lining up brackets and oiled runners, raising and lowering rollers, aligning bolts and threads, inserting a steel bed like a rectangular tongue, and so on. After a bruising encounter that required the improvised design of a weight-bearing cradle as another pair of hands, the press stood complete on its bespoke pedestal, ready for testing and the fitting of felt blankets.

It has been wonderful to be able to refresh this fantastic and visually striking piece of equipment, and it will be satisfying to see how students make use of it in their work in the years to come. As well as offering our grateful thanks again to Marcus for his generosity, we will also allow him the last word, as he kindly agreed to put down a few notes on the press and how it came to be in his possession in the first place:

“In 1981, I saw an advert for the press on the noticeboard in the Edinburgh Printmakers’ Workshop. Although I had no need for an etching press, and nowhere to put it, for some reason I found myself calling to arrange to see it. I travelled by train and bus from Edinburgh to Duns in the Scottish borders. I was met at the station by a young man whose handshake brought a tear to the eye. He drove me into the countryside and after a while we turned through some magnificent gates and up a lane, then into a vast cobbled stable yard with classical statues standing here and there.

The press stood in a stable. It’s a fairly common Victorian design, probably made by Hughes and Kimber of London, the famous 19th century manufacturer of presses (and supplier of etching plates to people like Samuel Palmer and Whistler). They later took over what is now TN Lawrence. Because this press has no gears, it’s probably an early version of their star wheel press and I imagine it was used for printing musical scores and engraved cards, notices, and invitations as well as small images.

The young couple who were selling it were restorers of metal classical sculptures and the stable yard was their workshop. They travelled all over the country, picking up the statues from the gardens of grand houses, restoring them and then returning them. Selling the press to me would fund the purchase of a book on classical statuary they’d long coveted in an antique bookshop in Berwick.

It was only when the press was delivered to my flat in London that I realised how heavy it was. I suspect that not only did it cause subsidence to our house, it also caused subsidence to every building in the parish. A year later when I lent it to a friend in south London I could hear the foundations give a sigh of relief.” 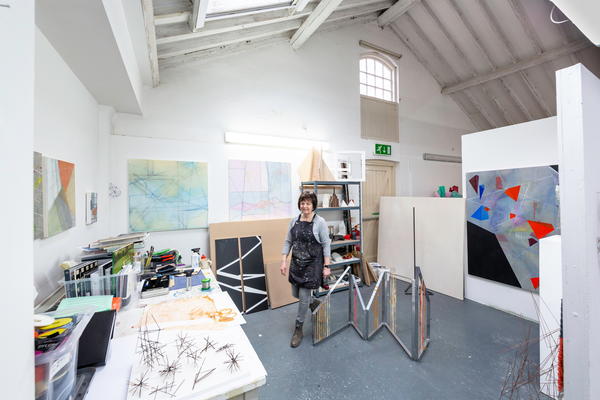 Students on the Fine Art programmes at West Dean College of Arts and Conservation benefit from large individual work spaces within the Edward James Studios, in addition to full access to facilities including the print room, sculpture courtyard, tapestry studios and photographic dark room.