In our latest blog, Writer-in-Residence Yvvette Edwards, reflects on her time at West Dean: a creatively inspiring experience in ‘one of the whitest spaces I’ve ever stayed in’. Her thoughts on hypervisibility during her stay offers an open and honest insight into her experience as a Black author, and we thank Yvvette for sharing this with us.

We know we have much to do to address diversity and we are committed to bringing about meaningful and lasting impact. We are working hard to listen, to understand and to change, and over the last year have introduced a number of actions to start to make that change happen. Having an open and honest dialogue with our artists, writers and students is an important part of our solution. If you’d like to know more our Diversity and Anti-Racism Statement is here.

"I arrived at West Dean College in the early evening after sunset, and from the moment we turned off the road and passed through the wrought iron gates, it felt like I’d stepped back in time and instead of sitting on the back seat of a local minicab, like I were travelling inside a horse-drawn carriage along the sweeping drive leading to the grand entrance of a stately home.

The main building was basically a castle, complete with crenelated parapet on top, and in the absence of the street lighting normally taken for granted by city-dwellers like me, it was draped with outdoor lighting so pretty and ambient, that instead of feeling as though I was pulling up at a college for a writing residency, I felt like I was alighting at Downton Abbey for Christmas.

After checking in at Reception, I was given directions to the Vicarage where I would be staying and the directions included following the road around to the right once I had passed the Orangery. When I arrived at the Vicarage and opened the door to my suite, I stepped into a beautiful space that was like a room straight out of Pride and Prejudice, complete with period furniture, yet confidently straddling centuries to accommodate a modern bathroom en-suite. My initial feeling was pretty much ‘Yep, great stuff. I can definitely write here!’

It is possible that West Dean College is the poshest place I’ve ever stayed. Its buildings are astonishing. Stepping into the main house was like entering a museum or art gallery, packed to the rafters with paintings and antique furniture and books, collections of artifacts, stuffed bodies of birds and heads of majestic animals mounted on oversized wooden house badges.

The grounds cover some 6000 acres of beautiful, lush and landscaped gardens stunning enough to qualify the gardens as both a tourist attraction and a popular venue for wedding receptions, and in addition, the quiet campus community includes a flock of quietly contented, free-ranging sheep.

It’s also one of the whitest spaces I’ve ever stayed in, and that is saying quite a lot when you consider that during my career as an author, I’ve gained considerable experience of being the only Black person at events I’ve been invited to. Outside of London, it’s rare that organisers and audience members confuse me with other visiting authors - because I’m often uniquely identifiable on the basis of having brought along the event’s diversity with me, then taking it away in its entirety when I depart, so it’s not the fact of the lack of diversity that made me think so much about the whiteness of the space during my stay. It was, I think, more to do with spending a week there on my own, in what felt like a constant state of hypervisibility whenever I stepped outside my room.

The consequence of this was that I thought about hypervisibility a lot, and not because anyone was unkind to me; no one was. Mark Radcliffe, the Creative Writing and Publishing subject leader at West Dean, could not have been more approachable, receptive and supportive both before and during my stay. Along with Sharon Duggal at New Writing South, he had invited me as part of a partnership between West Dean College and New Writing South to diversify opportunities for students and visiting writers by ensuring that writers of colour are part of their ongoing Writers-in-Residence programme, and both were proactive in ensuring I felt supported during my stay. But the fact is I could not shake off that awareness of my hypervisibility during my stay, which was something I hadn’t anticipated I would spend so much time thinking about while I was there.

For example, after I’d depleted my wine supply, the only place within walking distance I could get more was the village shop, which I’d already been to for snacks and water and where I felt confident they would remember the detail of my purchases. I couldn’t help wondering whether if you only see one Black person in weeks, months, years - surely not years, but how could I know for sure? Wasn’t it possible for you to think the one Black person you did see was how all Black people were?  And if I were responsible for the representation of the African diaspora in my every action, how could I possibly consider my own needs exclusively – four bottles, please? – and leave them thinking, Goodness me; they do drink a lot, don’t they?

Then there’s the very long story of how I took what should have been a short cut that resulted in me still walking some 90 minutes later along a road – tarmacked, thank God, and must surely get me back to the college entrance eventually! - with no pavements, just banks of bush and leaves and forest debris on either side, in the drizzling rain, but I was so hot from my unintended hike that I’d taken off and stuffed my coat into my backpack, walking on the right hand side so I could try and avoid becoming exotic roadkill, and where I could see the genuine astonishment on the faces of car drivers as they drove towards me, the rubbernecking of their passengers, to see a Black woman walking down that road in the middle of nowhere, as if teleported down from an alien spaceship.

And then there was the incident when I was taking yet another walk down and through the gorgeous sunken garden where the ornamental hedges were so many and cut into such perfect ovals they reassembled the raspberries on a mille-feuille. I exited the Sunken Garden so I could stroll the length of the stunning 300 foot long Edwardian pergola and about half way, there was a small pond, and I could see a mother and father with a small child, about two, all squatting at the pond’s edge, and the child was looking up at me, then its parents and  saying, ‘Black.  Black.  Black.’ I was determined not to step off onto the grass, or give them a wide berth and reduce the parents’ embarrassment, as clearly that toddler could only have learned to use that word in that context from the parents saying it - a lot! So I continued towards the family and when I was almost level with them and overlooking the pond, I realised there were three ducks on the water and that the toddler was actually saying, ‘Quack.  Quack.  Quack.’  After this particular incident, I thought very much about the impact of constant hypervisibility on mental health.

Nevertheless, I had a wonderful time. I already live very close to Epping Forest, which I’m very familiar with, but my visit to West Dean College coincided with autumn, my favourite season, when the colours of even the least impressive deciduous trees are so splendid.  What was particularly breath-taking at West Dean was the variety of the gardens. Views from tops of hills that presented the landscape below as a spread of natural-coloured textiles in a patchwork quilt, the lush Spring Gardens which were unusually wild as a result of COVID and cutbacks, the Walled Kitchen Garden that provided seasonal produce to the restaurant’s kitchen and the delicate plants residing inside the impressive Victorian Glasshouses.

I thought I would only take photos of my favourite bits of the garden, yet still ended up with over one hundred pics. I couldn’t resist the young tree outside the Orangery whose orange leaves had fallen to create an orange carpet on top of the grass about its base. Or the short film I produced of the dance of weeping branches clad in golden leaves, choreographed by the wind. Or the tunnel created by the college wall, tall trees and the longest natural carpet of autumnal leaves I’d ever seen.

In summary, I have very much enjoyed my time spent at West Dean College and feel grateful to have had the opportunity to get away from the noise and bustle of the city and home, and to spend time alone dedicated to my writing, in such tranquil surroundings.  This residency has left me feeling both recalibrated and rejuvenated and most determined to pop back next year, when I very much hope the rhododendron plants, so determinedly creeping up the outside of the main house walls, are in full bloom." 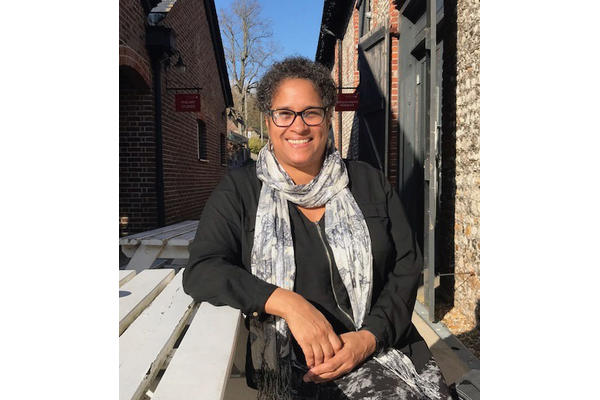 Yvvette Edwards is a British East Londoner of Montserratian origin and author of two novels, A Cupboard Full of Coats and The Mother, as well as a number of short stories which have been published in anthologies and broadcast on radio. She is particularly interested in writing that challenges the single narrative, giving voice to characters who are absent or under-represented in contemporary fiction. Her work has been nominated for a number of literary awards including the Commonwealth Writers’ Prize and the Man Booker Prize. 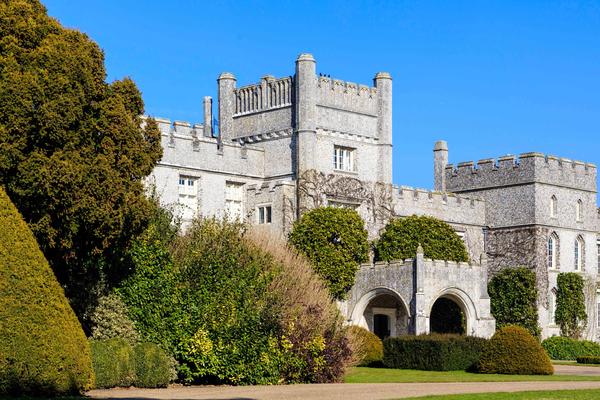 Residencies at West Dean College of Arts and Conservation

The College has been running residencies for the past 10 years, offering professional artists, writers and makers the opportunity to work on site for a period of one to three weeks. In 2020 we announced a new partnership with New Writing South to ensure that a minimum of 50% of our on-going Writers-in Residence (WiR) programme will support writers of colour. Writers-in-Residence also engage with students studying on our MA in Creative Writing and Publishing, this includes an artist's talk, tutorials and/or a seminar, workshop or group critique.