West Dean Garden's celebrated apple collection is housed within and around the Walled Garden. There are over 100 varieties of apple and 45 varieties of pear, including heritage varieties with links to West Sussex, many of them trained into exquisite traditional shapes.

In its heyday, at the turn of the last century, this area would have been the furiously active 'engine room' for driving the whole of the extensive gardens operation. Fruit was a very important part of the kitchen garden economy with a wide variety of different fruits being produced at all times of the year utilising the 'forcing' capacity of the glasshouses and frames. Pineapples, figs, peaches, nectarines, grapes, cherries, plums, soft fruit, pears and apples were all grown to perfection, polished prepared and taken to the great house.

The apple gained a status in the British Isles that it has never achieved elsewhere. In 1883 there was a National Apple Congress held in the Great Vinery of the Chiswick Gardens of the Royal Horticultural Society. Its aim was to resolve the confusion of identities which had developed and to select a good range of apples for commercial growers, but it also served as a triumphant display of the diversity of apples growing throughout the country. There were 1,500 varieties and the event attracted thousands of visitors and was kept open an extra week to accommodate all who wished to see it.

Sadly, increased competition from imports forced English growers to concentrate on a handful of good commercial varieties. The wealth of varieties once grown commercially lingered on in derelict orchards, declining Estate gardens and in the back gardens of cottages and houses across the country.

There has been a recent resurgence of interest in old orchards and apple varieties prompted by initiatives such as Common Ground's national Apple Day. West Dean's collection can be seen as part of this interest. Our collection has 4 main aims:

The bulk of the walled garden fruit was planted in the mid-nineties. Rootstocks used were MM106 for half standards and espaliers. M26 for 4-winged pyramids, goblets, espaliers and M9 for oblique cordons. 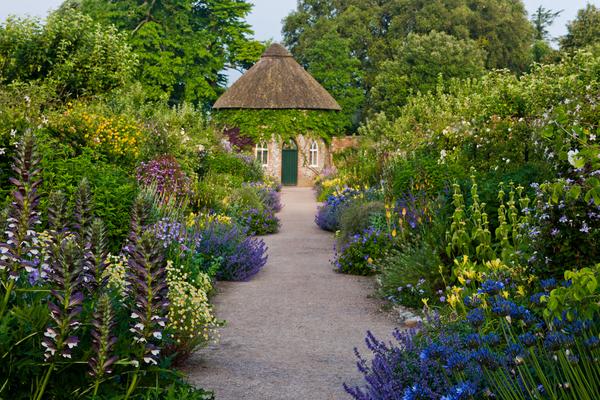 'The Book of Apples' by Joan Morgan and Alison Richards, Ebury Press, 1993.