Flaming June...or it would be if only we stopped, stood and saw the magical scenery around us. Gardeners tend to keep their heads down at this time of year to plough through the work. A feeling described by a gardening friend 'as like an octopus with an arm in every direction, as you get pulled from this job to that job'. Recognise the feeling? I hope, however, you were able to visit us in May to see the buttery buttercups, the sheet of cowslips in the arboretum and the new plantings in the gardens, all glorious spring-time stuff which fills the heart with joy.

Suddenly we had a taste of summer, alarm bells rang as the temperatures rose and glasshouse staff shot around like scalded cats to cope with the increase in watering duties as well as all the other seasonal work. But now the chillies and tomatoes are potted, as well as planted out, under glass and there is a new glasshouse display of what another gardening friend described as a quaint display of plants from Dr Hessayon's first House Plant Expert book. Do you know the book I'm talking about? I rather think of this display, though, as a selection of plants used to decorate town halls in the 1950s and 1960s of which I am inordinately fond, even if they are deemed common and, therefore, vulgar. I'm talking here about begonia, coleus and asparagus fern amongst others.

As the soil warms up and the chances of frosts diminish, feverish planting abounds to try and get young plants into the ground whilst still managing other seasonal tasks at the same time. New areas you might like to see are the succulent plantings beside the River Lavant in the Spring Garden and new plantings near the main gates to the college. We have also ceased planting the annual beds with annuals for a number of reasons and have replanted them with grasses and long flowering perennials. It's an experiment and no doubt will need a little editing in the future but even now the movement of the grasses brings another dimension to the site as opposed to the upright stiffness of bedding plants. For the record though I love bedding out as I do most horticultural styles.

Shaun, the kitchen gardener, has been busy this month as he continues to sow seed for the vegetables, plants out modules, erects growing structures for peas, beans and gourds, applies protective netting, maintains the tomatoes under glass as well as carrying out weekly mowing duties. Around all that he harvests crops to take to the restaurant kitchen or give to staff and volunteers, trains the soft fruit, waters and deals with pest and diseases that trouble his crops. He's still smiling though!

Jack, the grounds gardener, is flying around the gardens in June as he deals with a sudden flush of weeds which come as the spoil warms up. He looks after 35 acres so gathers volunteers who come in on their specific day, with welcome arms, as they help him to keep on top of the situation. He, too, has a mowing round so has to juggle his tasks with time, work force and weather. Anne, the border queen, is almost overwhelmed by her current seasonal work of staking, planting, tying in and sowing. She also trains the melons and cucumbers under glass three times a week. Recently she sowed our zinnia trial using long stemmed varieties suitable for cut flowers and it should be a blast of colour later in the season so watch out for that. 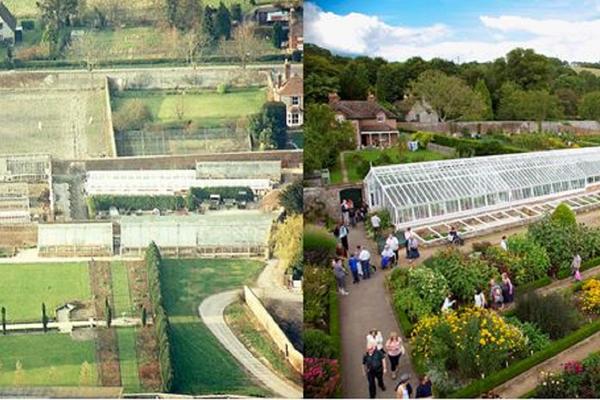 By the way, hot off the press is an exhibition celebrating 25 years of Glorious Gardening at West Dean which shows the background development of the gardens by the gardens team, volunteers and Jim and me. I can't believe it's 25 years since we started working at West Dean. The exhibition is located in the Mushroom Shed in the Walled Garden and is well worth a look, especially if you are a newbie to the gardens.