Musical Heritage at West Dean College of Arts and Conservation

Find out about Edward James' musical patronage and collaborations from the 1930s to the 1970s. 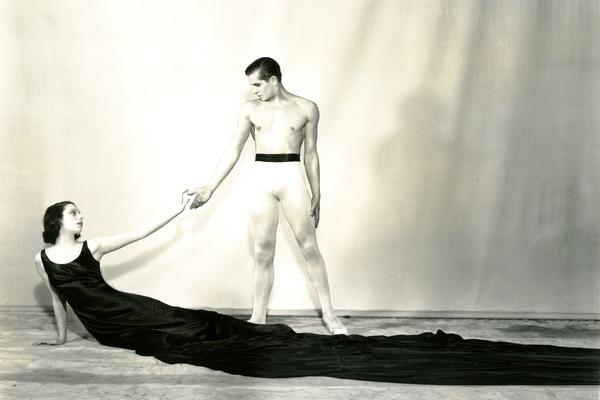 Although most widely known for his patronage of artists such as Salvador Dalí and René Magritte, Edward James followed in a tradition of patronage dating back to the Renaissance by sponsoring contemporary composers.

In the early 1930s, James became a member of 'La Sérénade', a chamber music society supported by a group of patrons who sought to assist young composers in Paris. James' engagement with the group saw him commission work from composers such as Darius Milhaud, Nicholas Nabokoff, Henri Sauguet, Igor Markevitch and Georges Auric.

At around the same time as he was attending and supporting La Sérénade concerts, James also became involved with 'Les Ballets 1933', a ballet company founded by George Balanchine and Boris Kochno. The programme included six ballets, staged in Paris and London, comprising three new productions with music by Kurt Weill and Bertolt Brecht, Henri Sauguet, and Darius Milhaud, as well as three newly orchestrated works by Schubert, Mozart, and Beethoven, all choreographed by Balanchine.

Image: Tilly Losch and Roman Nijinsky dancing in a production 'Errante' at the Savoy Theatre, London, one of Les Ballets 1933 presented by Edward James. 'Errante' was choreographed by George Balanchine with costume design by Pavel Tchelithcew. Photo by Sasha.

In addition to the well-known musical projects associated with Edward James, there are a number of other collaborations and compositions, never publicly performed or published, which can still be found in The Edward James Archive. Documentary material attests not only to his long-standing passion for music and friendship with composers such as Igor Stravinsky, but also suggests that music was an interest shared by other members of the James family. Samples of handwritten manuscripts, together with a large number of popular scores from the late nineteenth century, suggest that Edward's mother, Evelyn James, was herself an amateur composer in addition to being, by all accounts, a talented theatrical performer.

In addition to supporting new musical works, James also made use of his contacts to support the founding of West Dean College. Yehudi Menuhin, widely considered one of the greatest musicians of the 20th Century, was an early Trustee, from 1971-1975, and was heavily involved in the founding of full-time programmes in the conservation of clocks and the making of musical instrument. Edward James was introduced to Menuhin through his association with Diana Gould who had danced with Tilly Losch in Les Ballets 1933. Gould and James remained friends after the ballet season came to an end and, when she later married Menuhin, their friendship was extended to Yehudi.

In his role as Trustee, Menuhin supported the ongoing development of the College and the programmes that he supported are still taught at West Dean College today. After stepping down as Trustee in 1975 Menuhin continued to lend his support and staged a fundraising concert in 1976, the proceeds of which contributed to the founding of the West Dean Tapestry Studio.

Following 'Les Ballets 1933' James continued his patronage of the Arts in earnest, and alongside his well-known support of the Surrealists, published his own poetry and prose. This included his apocalyptic poem, 'Trois Sécheresses', which featured in the eighth edition of the quasi-surrealist magazine Minotaure, with illustrations by Salvador Dalí. James soon revised the poem for voice and commissioned Francis Poulenc to set it to music.

The cantata marked a turning point for Poulenc as it was the first time he had written a work for voice and orchestra. Dedicated to the violinist Yvonne de Casa Fuerte, it was first performed in May 1938 by the Chanteurs de Lyon under the baton of Paul Paray. It was subsequently revised in 1941 and again in 1951. Francis Poulenc considered the final version to be the definitive work.

Find out about West Dean College's dynamic and creative music courses and events.