Though West Dean is mentioned in the Domesday book as a hunting ground, Richard Lewknor (c. 1589 - 27 May 1635) built the first significant house here in the 1620s, next to the medieval village church. In 1738, Sir John Peachey (c. 1680 - 1744) acquired the West Dean estate. It was then inherited by Sir James Peachey (1723 - 1808), a courtier and confidant of George III who made him Lord Selsey in 1794. A peerage required a grander house, so in the early 19th century architect James Wyatt designed a suite of grand rooms and tall towers to give West Dean the appearance of a castle, thereby creating one of the largest flint-faced buildings in the country. The gardens were also enlarged at this time, and the park was laid out.

The Estate stayed within the Peachey family until Caroline Harcourt (née Peachey) died in 1871 when it was acquired by Fredrick Bower. William Dodge James purchased West Dean Park from Bower in 1891 and preceded to modify, modernise and furnish the house. The present State Room furnishings represent the period of extensive re-design of the building by Ernest George and Harold Peto. The interior re-design was guided by the prestigious furnishing and decorating specialists, Charles Mellier & Co. of Cavendish Square, London, encapsulating the grand and opulent Edwardian country house.

William James (1854 - 1912) was a son of a self-made American millionaire. He and his brother Frank (1851 - 1890) were well-travelled explorers, photographers and sportsmen. Evelyn James (née Forbes) (1867 - 1929), was the daughter of a Scottish baronet whose estate bordered Balmoral. She became a great society host, and was a close family friend of Edward, the Prince of Wales. In 1907, after four daughters, Evelyn and William James had a son named Edward Frank Willis James (1907 - 1984); his godfather was by then King Edward VII and a regular visitor to West Dean. 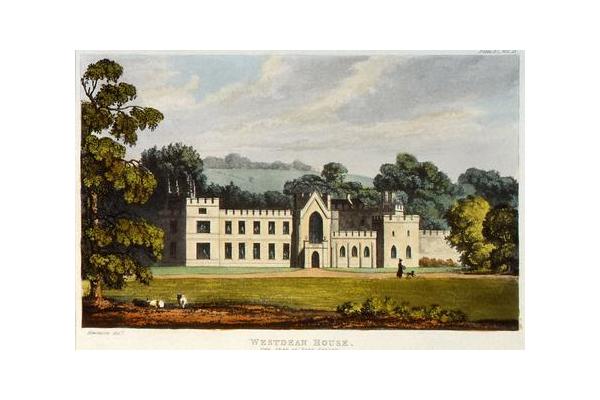 1086 - West Dean is listed in Domesday as a manor with hunting grounds. Earls of Arundel and Dukes of Norfolk held the land for almost 500 years before it passed back to the Crown and was sold by Elizabeth I
1622 - West Dean was owned by the Sussex family of Richard Lewknor, who built a Jacobean manor house here beside the medieval church of St Andrew.
1738 The estate entered the possession of the Peachey family through marriage.
1804 - 1808 West Dean House was enlarged by James Wyatt for James Peachey, first Lord Selsey. He also expanded the estate as far as the south coast, moved the road away from the house and landscaped the park to enhance its setting.
1808 - 1816 The second Lord Selsey began major planting in the park and Arboretum.
1871 Lady Caroline Vernon Harcourt (Peachey), sister of the third and last Lord Selsey died and left West Dean to a cousin, who sold off the house, collections and much land.
1891 William and Evelyn James bought the estate. They appointed Ernest George and Harold Peto as architects, making substantial changes to enlarge and beautify the exterior and interior of West Dean House and improve its gardens.
1911 The James' only son, four-year-old Edward James laid the foundation stone of the spectacular 300ft stone pergola on the north lawns, designed by Peto.
1912 William James died, the house was let, and the family moved out.
1932 Edward James came of age and inherited West Dean.
1939 In a letter to his friend Aldous Huxley, Edward James expressed his concern for preserving certain arts and crafts he feared would be lost during WWII.
1964 James established the Edward James Foundation a charitable educational trust, to fulfil his desire to nurture music, traditional crafts and the fine arts.
1971 West Dean College opened as a centre for education and training in conservation and in the visual and applied arts.
1984 Edward James died and is buried in St. Roche's Arboretum.
2019 West Dean College of Arts and Conservation is accepted on to the Office for Students Register of Approved Providers of Higher Education. Edward James thought of himself primarily as a poet yet his innovations in art, design and architecture mark him out as an unrecognised visionary of the twentieth century. Through his patronage and creative partnerships with prominent Surrealists such as Salvador Dalí and René Magritte, as well as his support of artists including Pavel Tchelitchew and Leonora Carrington, James was involved in the creation of some of the most enduring representations of the avant-garde, including the iconic Mae West Lips Sofa and Lobster Telephone.

James sought to escape the conventions of his Edwardian upbringing, using his inherited wealth to sponsor artistic expression and to explore the limits of the imagination. His circle of associates indicated a lifestyle as fantastical as the works of art he acquired. In his pursuit of beauty, James meticulously designed every aspect of his world, often seeking to bridge the gap between dream and reality.

This desire to turn the everyday into the marvellous saw James transform Monkton House - a Lutyens-designed hunting lodge built for his family on the West Dean Estate - into a surrealist extravaganza. During the mid-1930s James completely transformed the property both inside and out, commissioning carpets, wallpaper, bespoke furniture and unique fittings. This idiosyncratic retreat, which James used as his main residence when in the UK, was considered to be one of the most remarkable examples of environmental surrealism in the world.

However, James' artistic ambitions extended beyond surrealism. In 1933 he famously sponsored a season of Ballets in Paris and London, including a commission for the last collaboration between Bertolt Brecht and Kurt Weill. James was also a committed writer of poetry and prose, often using his own imprint, The James Press, to produce beautifully crafted editions of his work. His imprint also saw the first publication of the work of John Betjeman. 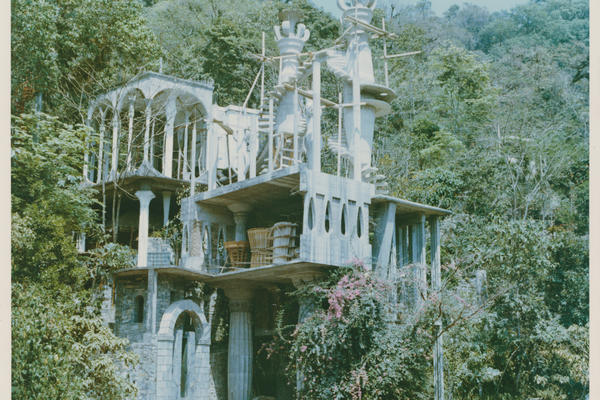 Arguably the culmination of James' artistic vision is the monumental gardens of 'Las Pozas' (The Pools) in Xilitla, Mexico. James first visited Mexico in 1944 and soon fell in love with its outstanding natural beauty and relaxed way of life - a far cry from British high society. In collaboration with his close friend Plutarco Gastélum, who would go on to be his estate manager and part of his extended Mexican family, James bought a former coffee plantation outside the small town of Xilitla, San Luís Potosí. From humble beginnings living in simple huts, the pair began to make their mark on the landscape, cultivating a garden of orchids and establishing a menagerie of exotic animals.

In 1962, a freak snowfall destroyed much of this burgeoning 'Garden of Eden' and prompted James to start building a more durable garden, this time in reinforced concrete, translating his passion for flora of the jungle into surrealist-influenced sculptural architecture. Working with local workers and specialist carpenters, James' developed his ideas intuitively and spontaneously and the site gradually evolved into a brightly coloured complex of some thirty separate structures, some up to a hundred feet high. The structures became increasingly fantastical, sprouting like vegetation, with spiral staircases ending in ceilings and bridges leading nowhere. Penetrated by the ever encroaching jungle, the border between interior and exterior space became blurred.

Today, 'Las Pozas' attracts thousands of visitors from around the world. Administered by the Pedro and Elena Hernández Foundation and supported by the World Monuments Fund, the site has undergone a programme of conservation to ensure that James' legacy will continue to inspire artists, architects, and audiences alike 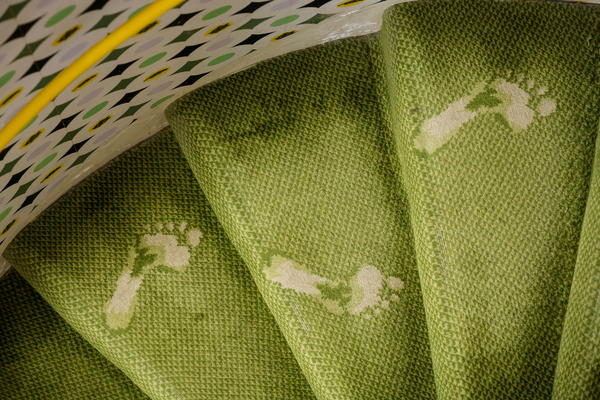 The West Dean Collection represents the cumulative acquisitions of almost 400 years of family ownership of the West Dean Estate, the conveyance to the Edward James Foundation in 1964 and the bequest of Edward James's personal estate, following his death in 1984.

Historic Collection items include fine marquetry and inlaid furniture, paintings, prints and drawings, textiles and tapestries, as well as significant ethnographic objects and examples from natural history. 'Special Collections' include a significant number of books from the William Beckford Collection and Edward James' personal book collection.

In 1984, the Collection expanded to include many of Edward James personal possessions. This included Surrealist and Modernist artworks, encompassing paintings, drawings and prints by artists most notably, Salvador DalÍ, Rene Magritte, Leonora Carrington, Pavel Tchelitchew, and Leonor Fini. There are a number of significant examples of Surrealist interior design, including the iconic Mae West Lips Sofa and the Lobster Telephone, these items are often requested for loan to national and international museums and galleries. 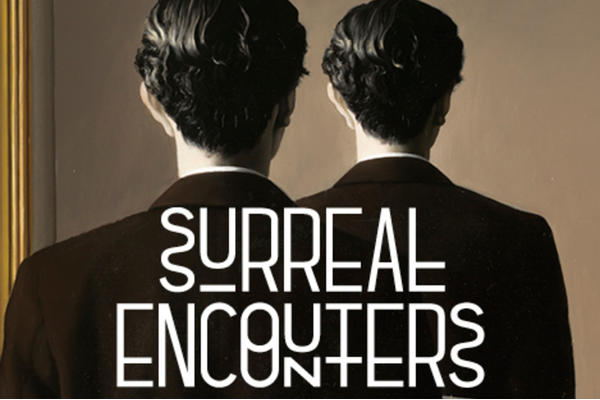 In recent years, West Dean College of Arts and Conservation has supported a number of high profile exhibitions that enhance research opportunities and extend the reach of the Collection. Exhibitions also enable the College to build partnerships with international organisations, furthering our reputation as a centre of excellence and providing students with outstanding professional practice opportunities.

Recent exhibitions that include Collection items include:

Surreal Encounters 'Mad About Surrealism'
Boijmans Museum, 11 February to 28 May 2017

"The greatest English patron of art of the early 20th Century"